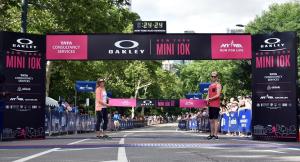 I’ve been in a bit of a funk since the NYC Marathon and have not blogged at all. The winter was really rough and I did a lot of eating (of the sumo wrestler variety) and sitting on the couch. I did manage to drag myself out to end the year with a 5 mile Turkey Trot and back to back half marathons on December 13 and 14 … craziness.  The first half of 2015 consisted of: a January 1st Hangover 5 Miler; the Philadelphia Love Run; the Philadelphia Hot Chocolate 15K (great race); the Brooklyn Half Marathon; the Boston Run to Remember Half Marathon; the Long Island Corporate Fun Run 5K; and today’s Oakley Mini 10K.

This was my third Oakley 10K and this race continues to kick my behind. This baffles me because a portion of the race is outside of the hellish Central Park and the course runs counter to the really steep hills. As always the beginning of the race was extremely crowded and congested, which limited my pace. I can’t say I was too bothered by the slow pace though because it was so hot that I knew that I should ease into this race. But what did bother me was the chick who pitched her bony elbow into my left boob as we were entering Central Park. She didn’t even look over to see if she had impaled me. Ugh!!! And less than a mile later, I almost took an elbow to the face by some 7 foot Amazon woman. I don’t recall having these problems when running in a mixed gender field. 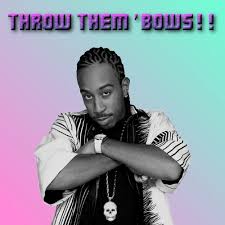 This race got hotter and hotter as it progressed. I stopped at most of the water stations to be on the safe side. However, I felt as though the water stations were short. By the time I would merge over to grab water the stations were over. I had to back track to get the water at one of the stations because I had completely passed it. They did have some water sprinklers out there, which was great. What they did not have on the course was Gatorade. What??? Here I am sweating buckets and they didn’t have even one station with some electrolytes. What was the meaning of that? All I knew was that they had better have some Gatorade at the finish or else there was going to be consequences and repercussions. At mile 5, I had visions of me turning over the water table at the finish after realizing that there was no Gatorade (much like Jesus when he flipped out on the money changers in the temple). 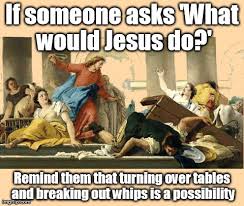 Luckily for them, they broke out the Gatorade at the end of the race. Now, I don’t mean to sound completely negative concerning this race. I do like it … or maybe I just like the idea of it as it is an all women’s race that provides the participants with nice tanks and medals. 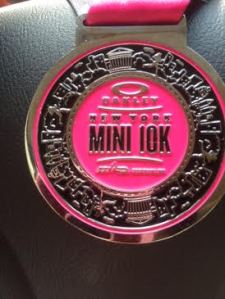 Of all the race distances, I feel like the 10K is the most tricky. I don’t feel as though I have the luxury of taking my time as I would in an endurance race but at the same time it’s 6.2 miles, which is significant mileage to be running at a fast pace. Today’s time of 1:09:02 is not my worst 10K time. That honor goes to the 2014 Oakley Mini 10K. 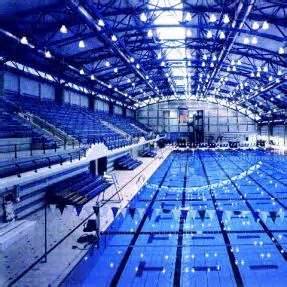 Last year I decided to get out there and run my first half marathon. I trained for twelve weeks with Team in Training and successfully accomplished that goal. This year I would like to complete a triathlon. To that end, I have registered for the Mini Mighty Man Triathlon in April 2013. The mini consists of a quarter-mile pool swim, a six-mile bike ride and a two-mile run. For you die hard iron man triathletes this race probably doesn’t even constitute a real triathlon, but for me it is HUGE. While I am confident in my ability to run two miles and I know that I can complete a six-mile bike  ride I currently am unable to complete the swim. In fact my swimming skills, or lack thereof, consists of a weak doggy paddle. Now, considering that I am working with a swimming instructor who has forbidden me from ever doing the doggy paddle again, I would have to say that I cannot swim. So training for this mini tri may prove to be quite the adventure.