Race day was here and the moment of truth was upon me. I knew I was supposed to eat breakfast to fuel the tank but I was just too nervous. So I just swigged some Gatorade, but not too much since I was wearing a onesy a/k/a one piece tri suit. I packed everything the night before and since my bike didn’t fit into my backpack, I just kept obsessing that I was going to forget to take my bike to the race. I rocked out to Israel Houghton’s “Everywhere That I Go” the entire way the race site. The song got me amped.

As it happens, I remembered the bike and arrived at the transition area, where I had to rack my bike and set up everything I would need during the race. For some reason, I thought there would be more room for my stuff. I had: two towels, one for my feet and the other for my body; my running shoes and socks; my helmet, sunglasses, bandana and hat. I had to carve out little space to place my items next to my bike. I went to pick up my timing chip that gets strapped to the ankle and proceeded to get my body marked. Yes, fun. I had to get my race number scrawled on my left arm and calf and my age on my right calf. Good times. I realized I was starving and one of my teammates gave me a tangerine. Thanks V. Then it was time to strip down to my swimwear. More fun. It was fahreezing out there. It couldn’t have been more than 38 degrees. I decided to keep my running capris on until we went inside to the pool.

Ah, the pool or The Beast as I prefer to call it. I’ve seen it and I’ve been in it but it was still intimidating.

We had to seed ourselves so that the fastest swimmers could go first. I promptly found my rightful place at the back of the line. We entered the pool one after the other in five second intervals. Since I was at the back, I got to watch a whole lot of swimming. We had to swim eight lengths of the 50 meter pool. After each length you were required to snake into the next lane until you completed 400 meters. I was mesmerized by the swimmers who were flipping into the other lane. It looked really cool. Before I knew it, the guy in front of me was jumping in the pool. Yikes. That meant that in 5 seconds I would be swimming.

I got my swim started and soon realized that the few people that got in behind me had all passed me. I wasn’t really bothered by it, I was just relieved that they managed to pass me without episode. I briefly felt a hand on my foot only once. After the second length, I ducked into the next lane and saw a guy up against the wall. He looked at me and said, “I’m crapped out.” I told him he wasn’t and he just needed to rest for a moment and take his time. Check me out encouraging others. Well, I took my own advice and managed to complete my 400 meter swim, but not without help from Coach Jackie, who I thought was poolside because I could hear her so clearly coaching me. Turns out she was up in the stands. That was some awesomeness right there. As I was finishing, I notice that I didn’t see the “crapped out” guy. It looked like I was the last person in the pool.

The next thing I knew, I was running into the great outdoors to get my bike. Coach was right by my side, which was great because I was so disoriented after being in the pool so long that I couldn’t figure out where I was supposed to be going. There must have been some serious adrenaline pumping though because I was running bare feet over some crusty cold dirt and grass and didn’t even care. My bike was going to be easy to find because everyone else had taken theirs to do their 6 miles … WRONG. Turns out that my swim was so slow that the bike racks were full because almost everyone had already finished their biking leg, re-racked their bikes and were already running. Panic set in. Now I couldn’t find one of my shoes and my helmet wouldn’t fasten. I grabbed my jacket but couldn’t figure out how to put it on. I heard Coach yell, “You don’t need it” and so off I went in my onesy. 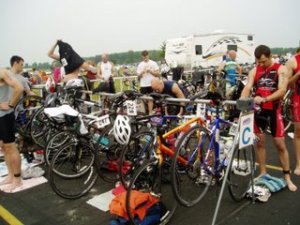 The above picture does not depict our transition area but provides an idea of what ours  looked like.

After getting on my bike I realized that I wasn’t in the mood to ride it at all. I just wanted to take a nap. How was I going to ride three loops of the bike course? As I was chugging along on the bike a 59 year old woman with a smiley face drawn under her age zoomed passed me. For a fleeting moment my pride told me not to go out like that but the moment passed really fast. Later for you lady, I’m just trying to survive this thing. After a while I passed two women who looked like they were just tooling around on their bikes and conversing about Dancing With The Stars or something. I was feeling good about myself until they passed me on the second loop. Whatever. I finally got done with the bike ride and had to go to back to transition to rack my bike and prepare to run.

Oh the run!!! It was the longest two miles known to mankind. I thought it would never end. Thankfully, Coach Jackie appeared and ran with me for a while. She told me I was running fast but I felt like I was running backwards, my legs were so heavy. I kept going and actually started to pass some people because many of them were walking. Turns out that the people, especially my swimming instructor, who told me that I would make up for my swim with my run were actually onto something.

As I was about to turn the last corner during my run, I saw and heard some random man say, “Go Jennean.” I must have looked at him funny because he started to laugh. And at some point I heard Jackie tell me to sprint to the finish. I don’t know how she managed to keep appearing but she did. As soon as I turned the corner, I saw them. They were right in front of me cheering me on … my teammates. There was a lot of hoopla. This had to be how random man knew my name. I did my best impression of a sprint to the finish. Using my first and last name, the race announcer declared that I had crossed the finish line. This was a nice touch and perk of being in a small race. There was a lady poised to place my medal around my neck. I screamed, “Give me my medal.” Poor lady. I think I might have held the medal up and kissed it at that point. The next thing I know, I had chicken soup in my hand. Thanks Lisa. And I was presented with my super, super fly sign. Here is a picture of me and my co-worker, who had a great race. 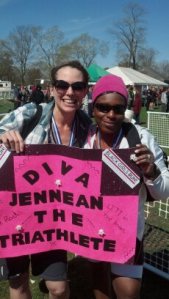 And here is a picture of the team, the newly minted triathletes.

Right after I finished someone asked me how I felt and without missing a beat I sad, “Awful.” But that feeling lasted no longer than 60 seconds. I felt fantastic and jubilant. With the help of so many I managed to accomplish what didn’t seem possible a month ago. I learned a lot about myself during this process. I discovered that I might not be playing with a full deck and that I’m a lot tougher than I thought. I was also reminded that God truly answers prayers. Even if I go on to do a full Sprint or even an Olympic triathlon, this triathlon will always be special to me.

So what’s next for me? Zooma Annapolis Half Marathon on June 1. Let the countdown begin. 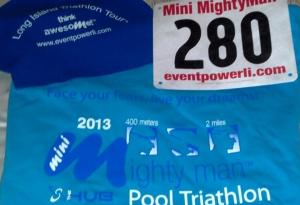 So it’s here, the Mini Mighty Man Pool Triathlon. Since January I have discussed swimming and have touched on biking and running. Now here is when we talk about  praying. If you believe in the power of prayer, pray that all goes well tomorrow. And if you like to get specific with your prayers: pray that I don’t freak out in 17ft of pool water; pray that my neighboring swimmers don’t splash water down my throat while I am trying to take a breath; pray that I don’t get kicked in the face in 17ft of pool water; pray that I don’t kick anyone in the face; and pray that the LI EventPower staff don’t make me exit the pool because my swim time exceeds the cutoff. We’re supposed to be able to finish the swim in 16 minutes. I finished my last 400 swim in 27 minutes. Umm Yeah.

Whatever happens tomorrow, I feel as though I have already won. Last Saturday, the ladies of BGR! Long Island and NYC came together for a practice run through. It was very well organized and we were even provided with race packets to simulate race conditions. How did I do you wonder? Well, I’d say that I came last by a mile but it was closer to two miles. So for all of the people who told me that I would make up for my slow swim on the bike and run, (my swimming instructor was the main offender) you were wrong. Despite all of that, I felt like a winner. I swam 400 meters, biked 6 miles and ran 2 miles. That’s right, I swam 400 meters. 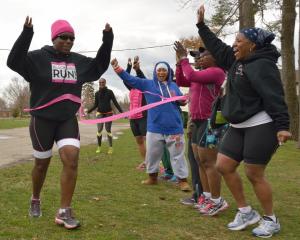 That’s me crossing the finish line. I was actually crying because I experienced such an overwhelming feeling of triumph and the support from the group was unbelievable. I heard them cheering for me before I even saw them. People in the park were stopping to see what was going on. I had conquered and that was the special occasion.

First Full MarathonNovember 2nd, 2014
I can do all things through Christ who strengthens me.
%d bloggers like this: