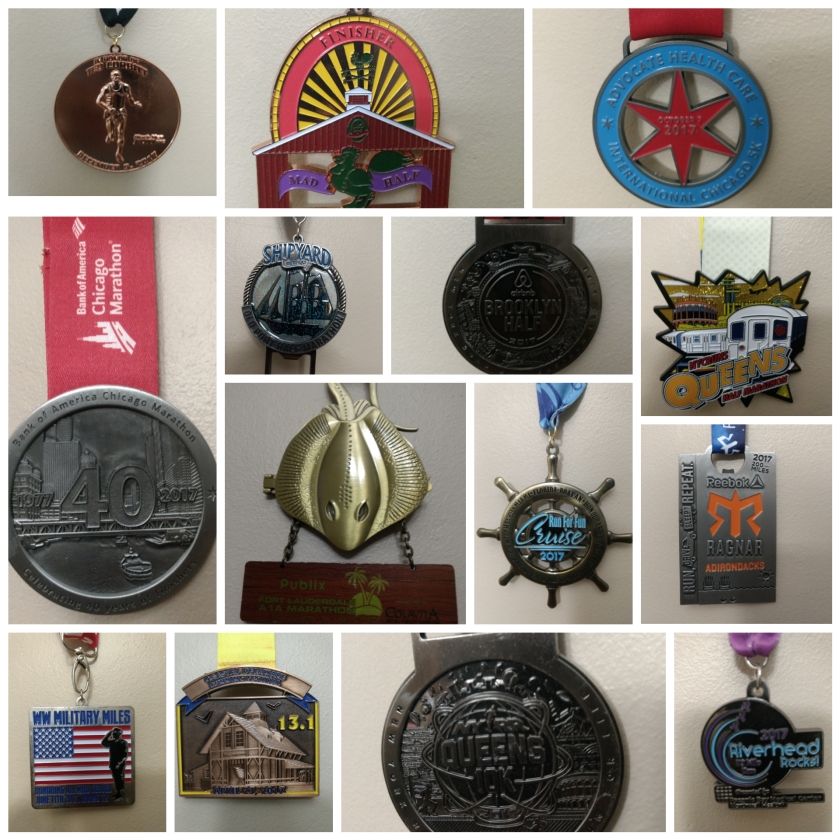 Looking back, 2017 was an enjoyable run year. Although not my speediest, it might have been my most interesting run year yet. Here is a brief rundown:a Ragnar Relay; a marathon; seven half marathons; a ten miler; a 15K; a 10K; a 5 miler; two four milers; five 5Ks; and various distances on the BGR-RFFC Cruise.

I will not recap all of the races but I think a highlight is in order.

The 200-ish mile Ragnar Adirondacks Relay. It was bizarre and I have not viewed white passenger vans the same since. 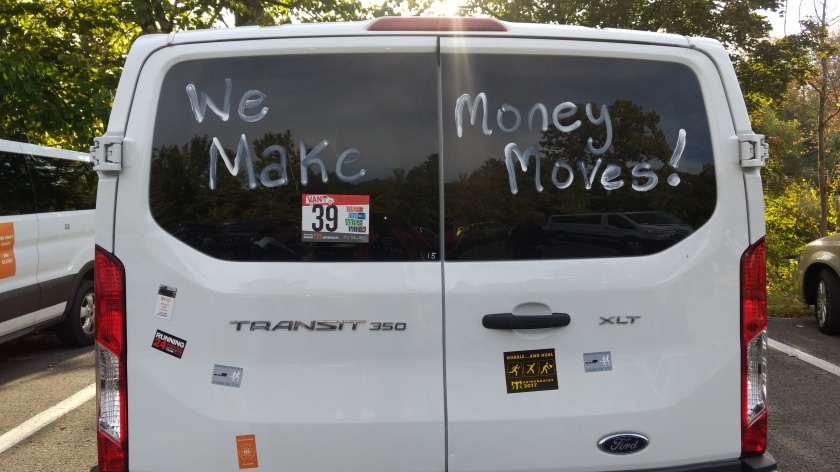 Including a volunteer, there were thirteen Bad & Bougie Beauties (our team name) transported by two vans and at least one of us was running at all times for approximately 36 hours. And yes, that includes nighttime. We ran from Saratoga Springs to Lake Placid. We took naps everywhere … in the van, at the beach, in a high school hallway. Some runners slept outside but we were too bougie for that. But because we were bad, we sweet talked the DJ into playing the song Bad & Bougie when our final runner crossed the finish line.

MOST MEMORABLE (In a good and bad way … but mostly bad)

Definitely the Shipyard Old Port Half Marathon. I still wake up in a cold sweat mumbling, “I’m the last runner.” It was a Murphy’s Law fiesta. I arrived at JFK the night before the race to catch my flight to Portland, Maine only to discover that the flight had been delayed two hours. The flight was delayed three more times. By the time I got to Portland, I only had time to change into my running clothes at the airport before picking up the rental car to head directly to the race. After finding parking, my bib that my roomie had left for me, and the start line (another debacle because I was misdirected to the start of the 5K) I was good and late when I crossed the start mat but figured I would catch up to the back of the pack. When I hit a fork in the road I was the only runner in sight. 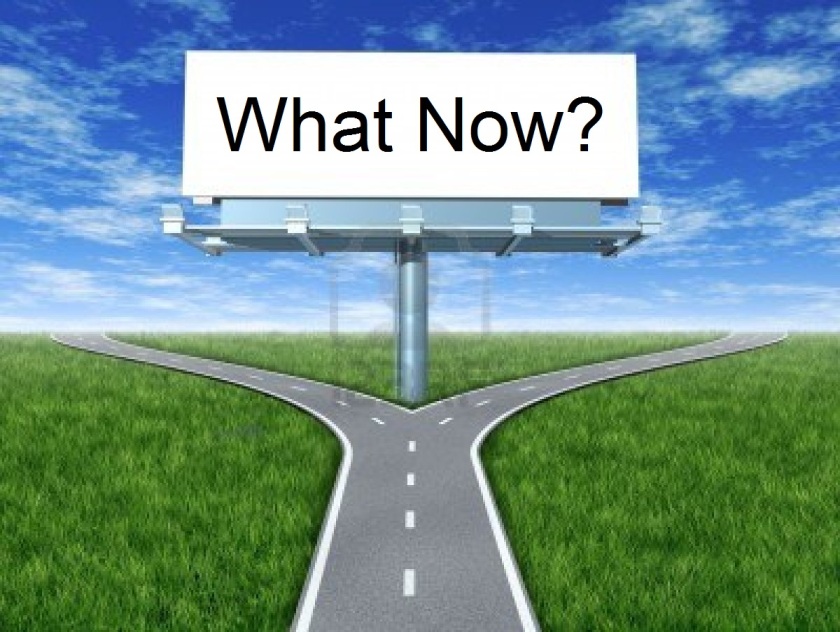 A course marshal directed me to make a right turn up a hill. The runners were running down the hill and one of them told me I was going the wrong way. Ha Ha, real funny Speedy. I continued running but after a while I began to get nervous because I had not yet caught the back of the pack or the turnaround to send in the direction of the other runners. I asked a marshal if I was going the right way. He didn’t think so. I turned around and asked every marshal I passed for directions. None of them could direct me. One of them told me to just fall in with the other runners. What? I ran back to the fork and the marshal that originally instructed me to make the right turn, told me that the course didn’t actually turn at that point but went straight. Dude!!! 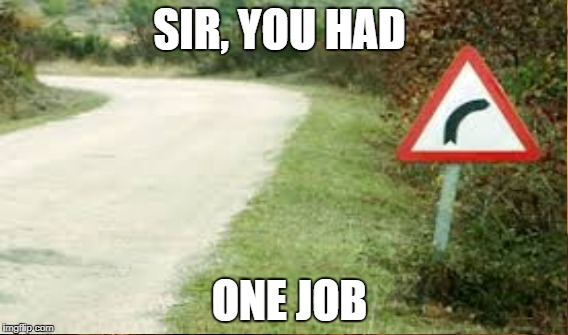 I didn’t even know how far out of the way I had run because my Garmin had suddenly conked out. This race had a strict 3:30 cutoff and for a fleeting moment I considered making my way back to the car but I had come so far to run this race, so run it I would. I tried to speed up to make up some time but had to keep stopping to look at the map online. Then I saw a table off to my right. There was a woman packing up a hydration station. She informed me that I had just passed mile 2. WHAT??? But I’ve been running forever! She scrounged up some water for me and summoned a guy on a bike. 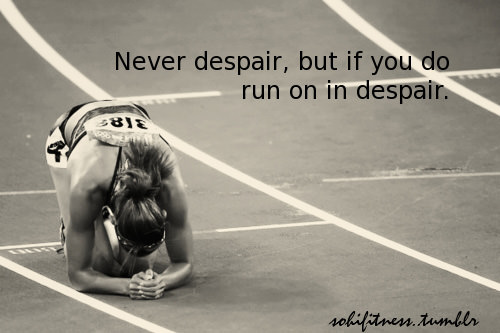 So I continued with Jake, my bike escort. The next water stop was an abandoned shambles. Jake rummaged through all manner of boxes and packages looking for water. Nada. We continued on. A police officer pulled up to us and said he did not realize there were more runners. He radioed ahead to instruct the race to keep the water stations open (it was July and blazing hot … bless his heart). That’s how “I’m the last runner” was birthed. When I would get to a water stop the volunteers would ask, “Are you the last runner?” So, I started automatically announcing myself at my arrival at the hydration stations, “I’m the last runner!” 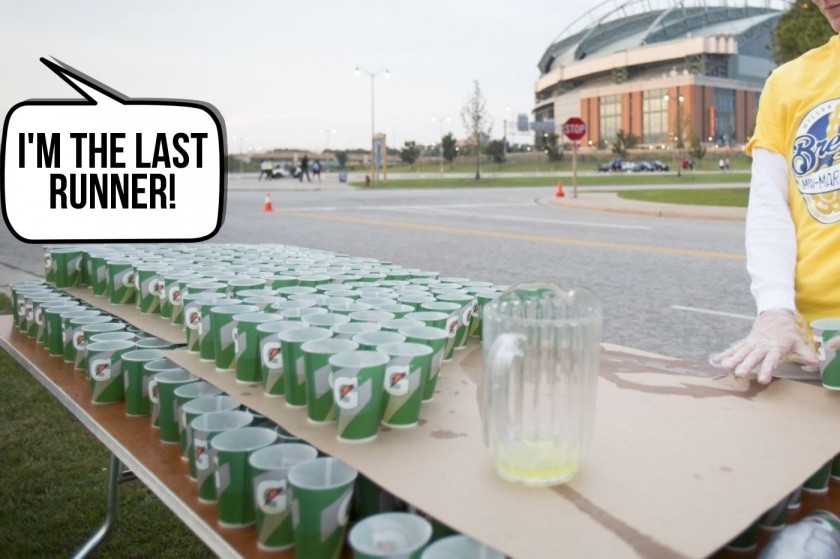 Throughout the race, the volunteers were extremely supportive. I could hear them yelling, “Here she comes, she’s looking strong” and they cheered me as I passed. Jake ran interference a few times to correct marshals who were sending me the wrong way and stayed by my side until we passed mile 8, when I caught up to another runner. I was no longer the last runner. It was a bitter sweet moment because I was back to being by myself but I did get to respond, “No, I’m not the last runner” a few times. 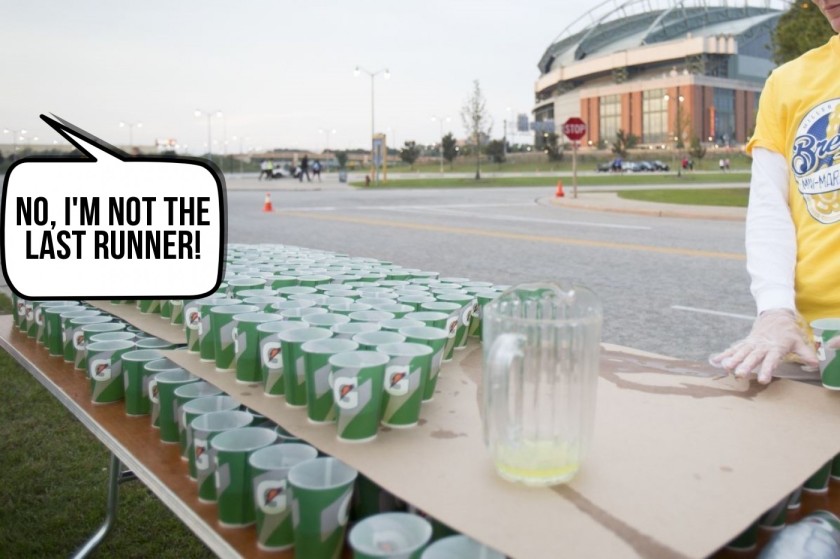 I fought the urge to stop and take a nap and was so grateful that the timing mat at the finish line had not been turned off.  The clock read 3:38:05 when I crossed. I probably would have torn someone’s head off if they had given me a DNF. I was anxious to see my net time because I figured I had started about 30 to 35 minutes late and that would be deducted from my clock time. I actually can not recall when exactly I saw my official time because I think I blacked out the memory. As my luck would have it, the start mat had been turned off by the time I crossed it, so 3:38:05 was my official time. 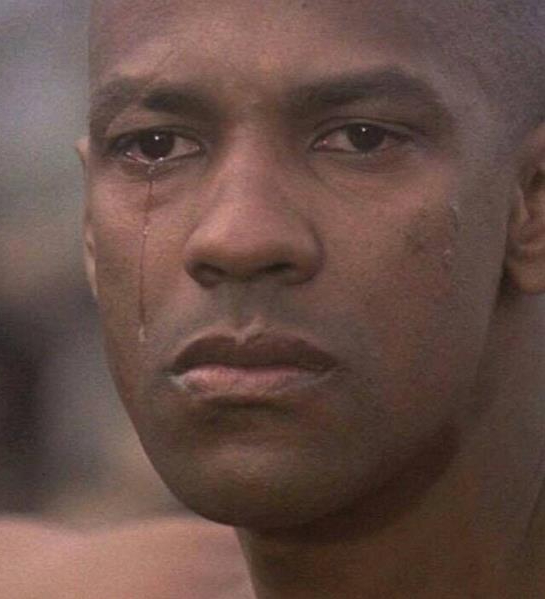 But the post race party was nice. There was lots of food and I found Jake to thank him. I  honestly don’t think I would have finished this one if it wasn’t for Jake. 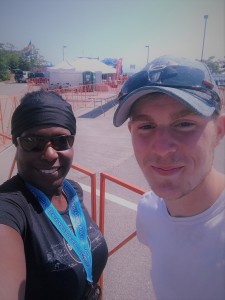 I also found my roommate (that never was) and thanked her for picking up my bib and then dropping it off at the start for me. Now, to make my way to Vermont to run the Mad Half the next morning.

The Bank of America Chicago Marathon by far. It was the 40th Anniversary of the race which drew 45,000 runners. Despite the race being so large, the logistics were fairly simple. The staggered start was quick and easy, the water stops were plentiful and operated extremely well and the medical tents had knowledgeable volunteers. It turned out to be a hot October day but there were misting stations and the Chicago F.D. had a huge misting machine that was a delight. The crowd support was awesome and the course was flat. I loved Chicago. 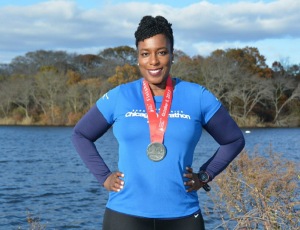 The NYCRUNS Queens Half Marathon takes this honor. Check it out. 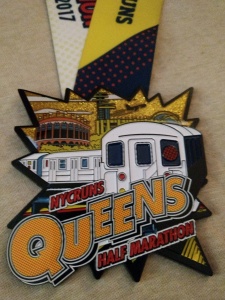